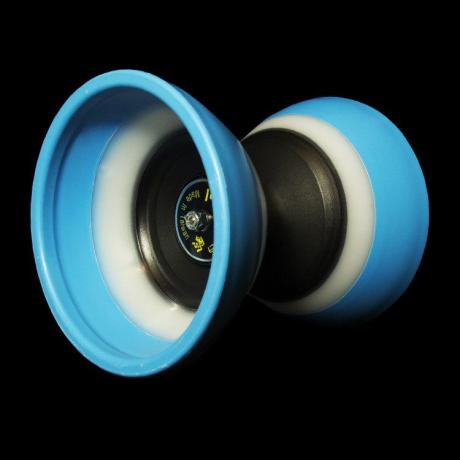 The Sundia Evo 5° Five Bearing Diabolo is one of the fastest, smoothest and most stable diabolos thanks to the five bearings, stability ring and hybrid axle.

The Sundia Evo 5° Five Bearing Diabolo has a lot in common with the Evolution diabolos. They share the patented stability rings and the hybrid axle that make these very lightweight diabolos (252g) much more stable at speed than other diabolos of the same weight. The big difference on the Sundia Evo 5° Diabolo is that they are fitted with five bearings making the Evo 5° one of the fastest, smoothest and most stable clutch diabolos on the market.

The stability ring, a plastic band running through the middle of the cup, gives the Evo 5° a superb weight distribution. This means that even though the Evo 5° diabolo weighs just 252g it's as stable as much heavier diabolos. The difference on the Evo 5° is that the stability ring is formed into the cups and is made of a translucent resin. As the rings allow light to pass through them the Evo 5° looks amazing with Sundia's LED kits (sold separately).

TheHybrid "Competition" Axle uses a durable central spindle with a Teflon coated aluminium sides. This reduces string friction and the weight at the centre of the diabolo. This allows multiple wraps without the diabolo catching the string and reduces deceleration to give you super long spin times. Combined with the five bearings means the Evo 5° is an absolute joy to spin.

The Evo 5° is suitable for all levels of play, from total beginner to seasoned pro. Small children may find this large diabolo too big but it's great for teenagers and adults.