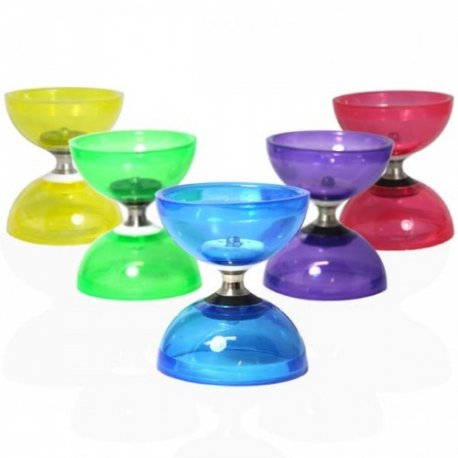 This is the new triple bearing diabolo from Juggle Dream. The bearing centre allows exceptionally long spin times compared to conventional fixed axle diabolos. The medium sized cups and the solid construction have made it one of the most popular bearing diabolos on todays market.
The Cyclone Quartz 2 is the second generation model of the popular medium sized, triple bearing, flexible plastic diabolo. The Cyclone diabolo uses a wide axle fitted with a one way bearing, making finger grinds and long complicated string tricks much easier to complete due to its prolonged spin time.

The Quartz 2 boasts cups made from higher quality moulds and with a fraction more weight around the rims to help the diabolo maintain its speed. The cups also have a smoother finish than the first generation. The second generation models also have faster bearings, stronger axles and new metal side washers.

A flashier brother to the original Cyclone, the Quartz has translucent cups that mean it looks great with an LED kit.

As you can only spin the diabolo in one direction some people find it easier to learn with. It is also much easier to get the diabolo spinning really fast as you can wrap the string a couple of times round the axle without fear of tangles.

There are, however, a few downsides.

1. Unlike conventional fixed axle diabolos the axle will need replacing once the bearings wear out.