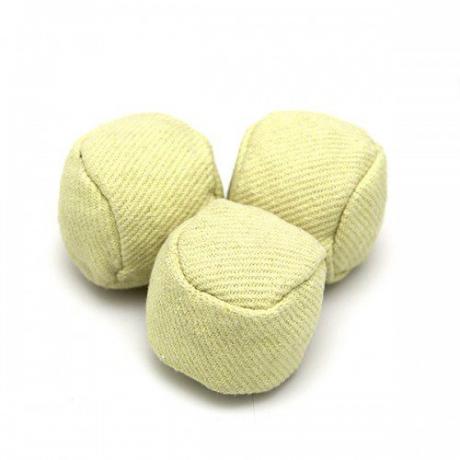 Freaks Fire balls are made from thick, tightly woven Kevlar® fabric. These look and feel just like ‘normal’ beanbags and as such are very easy to juggle with. All fabric seams have been ‘edge-locked’ with fireproof Nomex thread to eradicate any possibility of fraying, the segments have then been sewn together using the strongest high quality Kevlar thread in the Freaks range (Tex-80) three times. The final, hidden hand-sewn filling hole has also been triple sewn with double thread . Freaks Fire Juggling Balls are stuffed with a mixture of Kevlar fibre and fireproof ‘grains’. Each beanbag is accurately weighted at 130g

They are made to the highest possible standards and have been subjected to punishing pre-launch tests including ultra high drops, power throws against walls, stamping on them and generally doing our best to test them to destruction - all whilst on fire!.

The Freaks Fire Balls are used by fuelling them either by dipping in fuel (very quickly) or squirting fuel over them, then lighting them. Kevlar® gloves need to be worn to avoid being burned whilst juggling. It is recommended that they are not over fuelled by soaking as they can hold a considerable amount of fuel and produce large long lasting flames however it is unlikely that you will be able to juggle with them for more than fairly brief periods at a time due to the heat build up. Kevlar gloves will only insulate against the heat for limited periods (which can be extended by using heavy weight Kevlar gloves and/or lightly soaking the gloves in water so that they are damp rather than wet).

These balls are only available to adults. Fire Juggling is very dangerous and should only be practised in controlled environments with excessive safety measures in place.