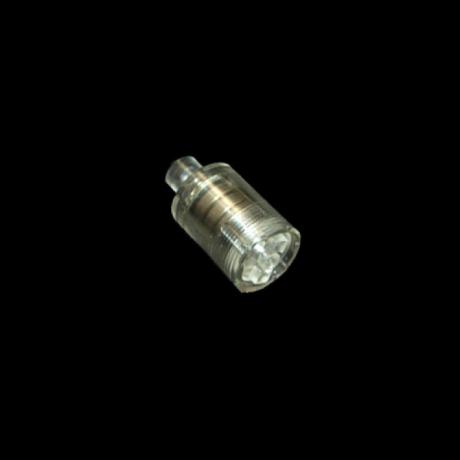 The LED All Light Diode fits all  LightUp products EXCEPT for Glow Juggle Rings.

The ALL LIGHT insert is sold individually without a juggle product as a replacement LED light diode, or stand-alone rave toy. Batteries are included. You can also choose the LED All-Light as an upgrade to fit our various Light Up and Juggle glow products. *NOTE: Upgrading a product to use an ALL LIGHT is done on that product's page, where the led colors are chosen.

HOW IT LOOKS:
27 of the best custom made color patterns you will ever control!The colored circles in the illustration accurately represent the All Light's color tracers in a circular motion. Many research hours were spent finding just the right mix of colors, patterns, and blinking speeds, to match the speed and motion of the various juggle props and skill toys, as the user desires.

HOW IT WORKS:
27 light diode patterns are located within 3 LED modes (ABC). Access and control them by pressing a button located in the middle of the LED diode cap. Pressing once will control a diode pattern's effects–like flourescent and/or LED blinking speed. Pressing twice changes LED neon patterns.Pressing three times shuts the diode off, and the next time you press once, you are brought back to Glow Mode A.

TO INSTALL BATTERIES:
1. Unscrew the LED cap and slide out the LED diode battery holder or just dump out the batteries themselves.
2. Install three batteries (LR1142) with the positive side facing up towards the opening and the rubber ring under the top battery.
3. Re-install the light led battery holder back into the product.
4. Screw the cap back in (be careful not to cross thread the cap, it should turn smoothly and easily).
5. Tighten the cap until it is snug and the chip activates red/green/blue/off. Don't over-tighten.

NOTE: To save battery life when not in use, unscrew cap just until the power/light goes out.When LED batteries are first installed and when the cap is first tightened, the ALL LED light initializes by first blinking red/green/blue/off. This is normal. But if this happens in the middle of normal play, or when trying to change patterns or modes, it means batteries might need to be changed (or the cap may need minor tightening).

NOTE: The LED All Light Diode fits all products EXCEPT for Glow Juggle Rings.