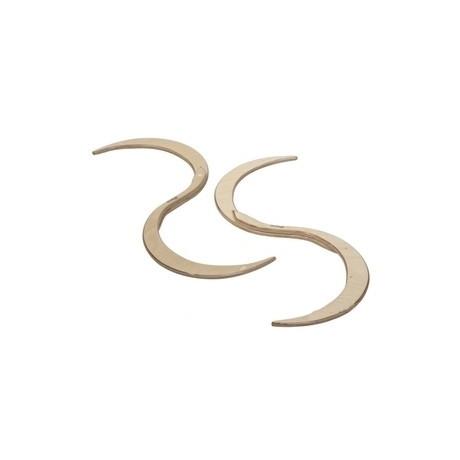 S-staff made from wood. Rounder than boogang, folding. Pack of two pieces.

The Firetoys Mark II Wooden S-Staffs share many of the quality features of the Mark I's but also boast a number of improvements.

Like the Mark I's, the Mark II's are made from the same high quality birch plywood which has been routered to leave beautifully smooth and rounded edges.

The shape of the S-Staffs has also remained. Inspired by the shape of the props used in Michael Moschen's seminal "Curves" performance, they are more of a broken circle than Buugeng allowing you to isolate near perfect circles and other geometrical shapes.

Again, like the Mark I's, the Mark II's are made from two identical halves which are kept together by a pair of super-strong magnets. The two pieces can be turned round, packing down to half the full size (49 cm x 28 cm x 3 cm) to make them easy to transport.

These magnetic attachments have, however, been improved for the Mark II model so you can now interchange the pieces in your set.

The decoration has also been improved. The pattern has remained the same but the quality of the paint and the finish is superior to the Mark I's.

The Mark II's have also been lacquered adding a shine, protecting the paint and leaving these props with an outstanding finish.

Spinning S Staffs is very different to normal staff spinning. Moves should be slow, graceful and very controlled - focussing on creating shapes and patterns with the two staffs. The first, and trickiest, step is to keep the S Staffs flat and not allow them to twist through their planes. Another major difference to straight staffs is that if you turn and S-Staff round, the technique alters considerably, even for a simple figure-8. The easiest way to spin is with the curve leading, rather than the open end of the S Staff.